“This kind of installation would never have been feasible a few years ago, and the projectors would have been enormous.”
Tom Burch, Managing Director of Projection Artworks 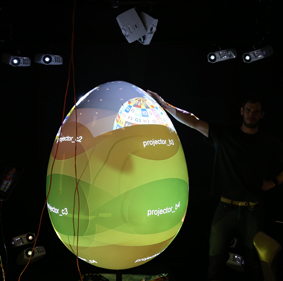 “The continuing development of projector technology is constantly opening up exciting opportunities in retail, even in high levels of ambient light. This is genuinely daylight-visible.”
Tom Burch, Managing Director of Projection Artworks 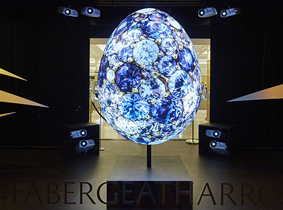 “the lighting conditions and projector setup were unlike anything I’ve ever worked on in 10 years of making content for projections, so we had to rethink our grading process to allow for the incredibly bright projectors and the daylight/ night conditions.”
Gavin MacArthur, Projection Artworks 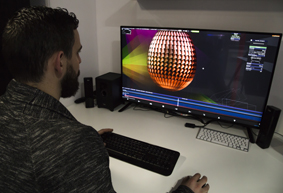 “We needed projectors that made the challenging blending as easy as possible and Optoma’s DLP technology was the best for the job.”
Emily Gibson, Projection Artworks 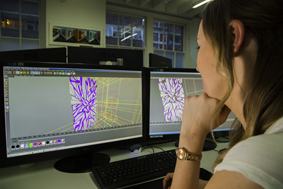 “Developments in both media server and projectors have come a long way…Optoma’s projectors allowed us to achieve 14,200 lux per square metre, even with the limited space and throw distance inside the window.”
Emily Gibson, Projection Artworks 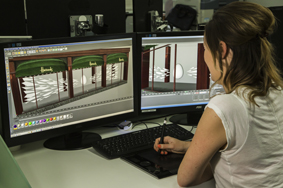 “My favourite part was witnessing the interaction from the customers; It pushed the boundaries of technology and window design. We’re ecstatic with the results!”
Stuart Henry, Managing Director of JUSTSO 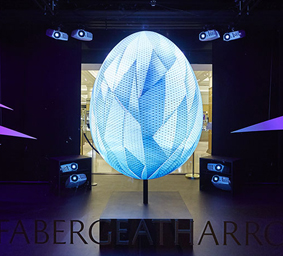 The project represented a technical challenge for Projection Artworks and Optoma, which provided the projectors for the month-long installation. A genuinely daylight visible projection was created using Projection Artworks’ DisplayMapper technology, which works by applying large amounts of light to relatively small areas. The Faberge egg was covered with an unprecedented 14,500 lumens/sq metre, around 200 times brighter than a typical outdoor building projection.

The projection was made possible by the d3 4 x 4 Pro media server, which can simulate every aspect of the production in the studio before arriving onsite.

Initially the challenge was to create ultra-high resolution 360° photos of the egg pendants, which in real life only measure approximately 15mm in height. This presented major issues with depth of field, and each egg required 64 photographs from different focal lengths to create the highly detailed 360° models required. The final animations were then rendered out in 16 HD resolution to properly show off the giant egg in all its glory, 100 times the size of a real Faberge pendant.

Projector alignment was a challenge as the egg model has no defining corners, but a seamless output was facilitated by high resolution 3D scanning technology.

Projection Artworks’ animation studio and in-house development team worked together to create dramatic interactive content that allows Harrods shoppers to explore the world of Faberge via a custom-designed touch screen. Shoppers choose their favourite Faberge design and watch a personalised 3D projection show unfold before their eyes, inspired by their selection. In total, 10 exclusive new designs are showcased in emerald, ruby, sapphire and diamond variations.

“This kind of installation would never have been feasible a few years ago,” says Tom Burch, managing director of Projection Artworks, “and the projectors would have been enormous. The continuing development of projector technology is constantly opening up exciting opportunities in retail, even in high levels of ambient light. This is genuinely daylight-visible.”